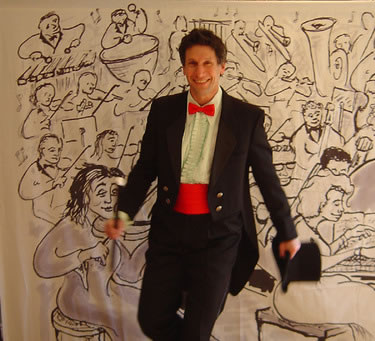 “His songs are funny, but Perlmutter is not just a highbrow “Weird Al” Yankovic. The lyrics are hummable mnemonics, each imparting information about the work or its composer.”

“Parents report that their kids love to sing along. And the best part? They don’t know they’re learning a little bit about the wider world of classical music — or they’re having too much fun to care.”

Some years ago, Richard Perlmutter toyed with the idea of writing lyrics to masterpieces of classical music.  While humming Beethoven’s 5th Symphony, the words “Beethoven’s Wig is very big” popped into his head. With that spark of inspiration, Beethoven’s Wig was born.

The first Beethoven’s Wig album, Sing Along Symphonies, was released on Rounder Records in 2002 to overwhelming fanfare. Perlmutter was invited to appear on NPR’s All Things Considered, and then on NBC’s Today Show. National press and critics loved the fresh approach to classical music that anyone, especially youngsters, can enjoy. The album accelerated to the top of Amazon’s Bestseller List, where it held the #1 position on both the Amazon Classical and Children’s Music Sales Charts for four months. Over the next year, Beethoven’s Wig received 15 national awards, including a Grammy Nomination for Best Musical Album for Children and the designation of ‘Notable Recording’ by the American Library Association.

Since its exciting beginning, Beethoven’s Wig has consistently released quality family-friendly music, with a total of 5 albums that have cumulatively earned 4 GRAMMY nominations, 5 Parent’s Choice Awards, and dozens of additional honors.

To date, the Beethoven’s Wig series has received a record 50+ National Awards. Perlmutter continues to perform with his group of four Beethoven’s Wig singers.  Hailed as opening the door to “serious music” in a way that’s fun, Beethoven’s Wig is now the most honored musical group in family entertainment.

Advance Reservations are closed at this time for the event.
Please call the museum for more information at (413) 322-5660.