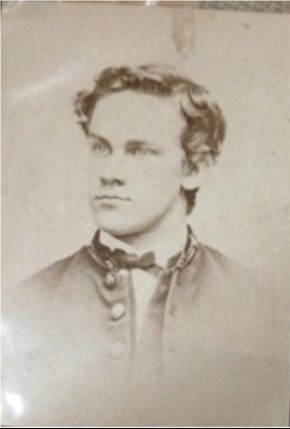 Caleb Cooley Dickinson of Hatfield, Massachusetts (1804 – 1882) founded the Cooley Dickinson Hospital in Northampton, Massachusetts with a bequest of $100,000, making an enormous contribution to the area. Considered an eccentric personality, Dickinson never married, was gender non-conforming, and was revealed to be a crossdresser upon his death. Dickinson legally adopted his closest companion James Donnell in order to form a family unit and to include Donnell in his will. One-hour slide presentation including a Q and A.

This series of three talks taking place this summer is based on original research conducted by the Sexual Minorities Archives about pre-Stonewall LGBTQ figures who lived and worked in western Massachusetts.

These lectures and events are funded by a Holyoke Local Cultural Council grant.
All lectures will take place at Wistariahurst, are free-of-charge, and masks will be required

Sean Donovan (he/him) currently lives in Northampton on unceded Nipmuc/Pocumtuck land and first came to the SMA six years ago while working as a facilitator of an LGBTQIA+ peer support group for the Wildflower Alliance in Holyoke–to learn more about his queer and mad lineage and to connect other queer and trans* people in his community with these resources too.  He began as a community volunteer helping catalog new donations and at events and, true to the SMA’s mission, believes that public education and learning marginalized histories, both one’s own and of others, is an antidote to oppression and despair.  In addition to acting as SMEF Board Director and SMA volunteer, he’s also created and produced episodes for the Out of the Archives podcast.