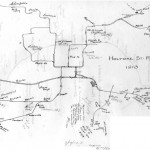 The Holyoke Street Railway enjoyed some of its greatest success during the years 1910 to 1923. This was a period of major rail and service expansion. In addition to carrying passengers, the HSR began offering milk & mail transport services, street sprinkling, and funeral transport. Funeral cars were equipped with room for a casket, the attendent mourners, and a trolley inspector to steer the car.

Ridership of the Mt. Tom Railway to the Summit House peaked in 1920 at 75,532. In 1923, earnings for the company were $3,500,000, its highest ever. This prosperity mirrored Holyoke’s. In 1920 the population of Holyoke peaked at 60,203. Combined with the economic boom of the United States’ entry into World War I in 1917, the late teens and early twenties were truly a golden era for Holyoke and its railway company.

In conjunction with HSR’s prosperity came signs of its demise. In 1914, so called “Jitney Buses” began to appear in Holyoke. These were small, usually amateur, vehicles that were driven short distances. There were an estimated 113 Jitneys in Holyoke in 1915. They were called Jitney Buses because they charged a “jitney”, a slang term for a five cent piece. The HSR purchased its first bus in 1921.

Despite the generally peaceful paternalistic relationship between labor and industry in Holyoke, there have been periods of unrest. The Holyoke Street Railway was no exception. In 1915, 250 HSR car men went on strike after the directors of the company refused to arbitrate, claming that the striking workers were no longer their employees. The strike was ultimately settled.

End of an era

In 1912, the man who was the driving force behind the early growth and expansion of the HSR resigned. William Stiles Loomis served the company during its acquisition of Mountain Park, the Summit House, and major line extentions. In 1913, Louis D. Pelliser Sr., became the president of the Holyoke Street Railway. Mr. Pelliser had worked his way up from being a conductor in 1892. He was the company bookeeper when he was named president in 1913. His brother, George Pellisier, who began his career with the company in 1904 as an engineer; became the Assistant General Manager and Chief Engineer in 1917. George was also a vice-president and member of the Board of Directors of the Northampton Street Railway.

There are no scheduled events for this time period.
Gardens at Wistariahurst
Recent Blog Posts
Wistariahurst is owned and operated by the City of Holyoke. Additional support is provided by The Wistariahurst Foundation, our members, and generous contributions from the community.
Support Our Mission
Back To Top