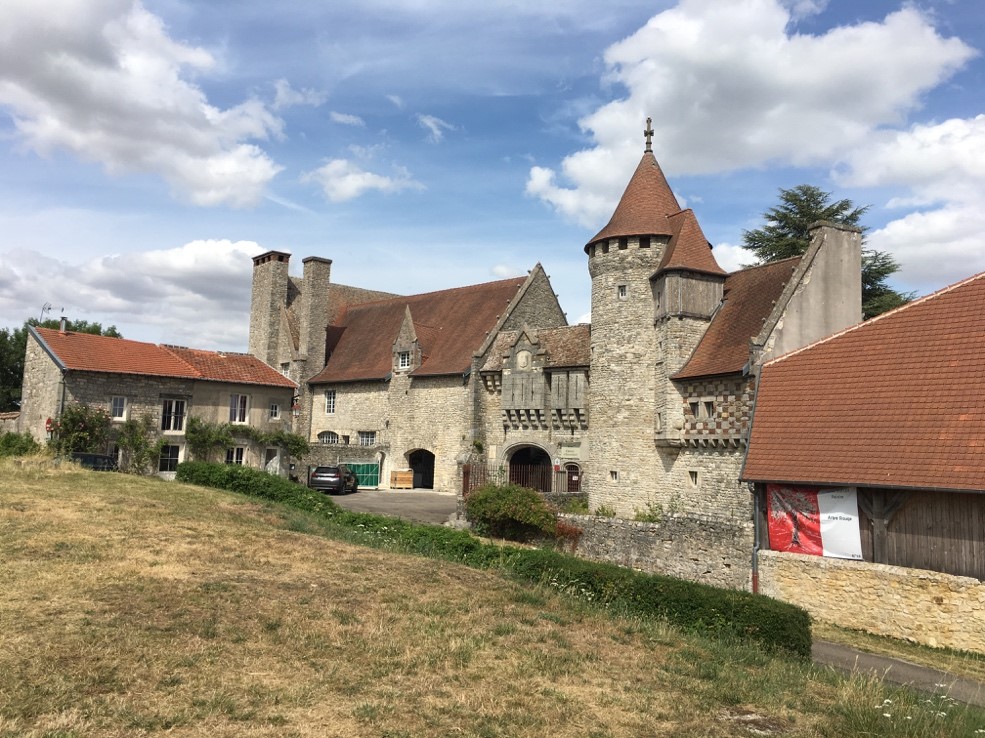 A few weeks ago, I had the opportunity to visit France’s historical Alsace-Lorraine. I went for a rather odd reason too: Belle Skinner, philanthropist and daughter of Holyoke silk magnate William Skinner, not only frequently visited the area during her time in Europe, but fundamentally changed hundreds of lives in the wake of the First World War. I was there for what is perhaps Holyoke’s most unusual historical connection.

The villages of Hattonchâtel and Apremont-la-Forêt are sleepy settlements in France’s Grand Est region, tucked neatly near the border with Luxembourg and Germany. Hattonchâtel is about 30 miles southwest of Metz, and 12 miles to its south sits Apremont, located about 30 miles northwest of Nancy. They are, by every measure, very rural. It takes about an hour of backroads travel by car to get there, and the nearest train station to either village is 8 miles away. The landscape, a beautiful stretch of fields, looks like the Midwest with just enough hills to keep things interesting. There is one bus stop in Hattonchâtel, and I couldn’t recognize either of its destinations. The point is, I was out there.

Indeed, when I hopped off the train in Onville, I landed on nothing less than a dirt platform. I had about 40 miles to cover, and 7 hours to do it. As luck would have it, I managed to befriend an extended local family. After a few miles of walking from the station, I finally saw a group of people. I crashed their barbeque, and while they hardly spoke English, and I spoke even less French, we managed to get our points across. The family, along with their cousin and aunt in Hattonchâtel, offered to drive me wherever I wanted to go. The situation was as lucky as it was surreal. A word of advice to those who want to visit – rent a car and bring a map.

And yet, this beautiful nothingness was where Belle Skinner chose to make perhaps one of her greatest gifts of all, one that would eventually lead to her knighthood by the French government. Like much of the Alsace-Lorraine, WWI left the region devastated and in need of rebuilding. Belle, who visited the area extensively during her time in France, committed $1 million to the reestablishment of the town. The New York Tribune picked up the story, one of the few sources available on the topic. Its November 7, 1920 headline got straight to the point: “Rich American Woman Adopts an Entire French Village.”

There were distinct Massachusetts connections to the area. During the war, a state regiment had fought in the region, and casualties were high. Today, a Jefferson Memorial-esque marble rotunda dedicated to those American soldiers juts out on a hill between the villages. Skinner saw that destruction as she drove through the villages in 1919 and was aware of just how much had been lost.

But she also saw a piece of home. While the modern commune of Vigneulles-lès-Hattonchâtel encompasses several villages, Hattonchâtel was a distinct autonomous village in Skinner’s time. Its position on top of a large hill separates it from the larger village of Vigneulles-lès-Hattonchâtel below. Even today, locals I spoke to differentiated between the two settlements. They’re no more than a mile apart, and now legally under the same jurisdiction, but still remain distinct places to those that live there. As the Tribune reported, this dividing hill reminded Skinner of Holyoke’s own Mt Tom, strengthening her resolve to help the town. It’s not a stretch to make the comparison either. While Mt Tom would dwarf the hill, its prominence is exaggerated by the flat farmland around it, and it has the same general shape: a long slope with a sudden drop off. Interestingly enough, the woman who had offered to drive me back to the train station told me the region was home to “Les côtes de Meuse,” a series of seven prominent hills. I couldn’t help but think of the Pioneer Valley’s Seven Sisters. Perhaps Skinner was on to something after all!

Hattonchâtel’s centerpoint is its chateau, originally built in the 9th century and rebuilt with Skinner’s money after the war. It offers a commanding view of the farmland around it. If the hill was Mt Tom, then this was its summit house. The recreated gate is flanked by two memorial plaques describing the history of the site, and Skinner’s contribution. The right side roughly reads: “In memory of Miss Belle Skinner of Holyoke, Massachusetts, United States of America, passed away in Paris, April 8, 1928. This remarkable and deeply missed benefactress rebuilt this castle, built in the 9th century by the bishop of Verdun, Hatton, and occupied, throughout the Middle Ages, by his successors. Her brother, Mr. William Skinner, willing to respond to her wishes and to perpetuate her memory, yielded the castle to the Ecclesiastical Union of Verdun, chaired by the Bishop, His Excellency Monsignor Ginisty, Officer of the Legion of Honor, September 7, 1933.” The left inscription offers a bit of its history: “This castle was imagined in 1927 for Miss Belle Skinner of Holyoke Mass, USA, great friend of France and benefactor of Hattonchâtel village, by the architect DG Jacquelin of Evreux, and realized by the engineer Magnin on the location of an old citadel built in 859 by Hatton, 29th Bishop of Verdun, and destroyed by Richelieu in the 17th century.”

Skinner herself is immortalized in the street grid. The road leading to the chateau is known as Rue Miss Skinner. But that didn’t always mean locals knew much about her. The Tribune describes borderline veneration after her efforts: “A woman of eighty-six years never passes her in the village except to kneel and kiss her hand. Others doff their hats or curtsey in awe.” Yet today, villagers know her connection to the chateau, but not much else. Skinner is an American to them, not a Holyoker. Holyoke was a foreign term to everyone I met, and one couple that gave me a lift didn’t even know her first name until I told them- a consequence of the road being named after “Miss” Skinner. The family I befriended was also thrilled to hear about Wistariahurst. Seeing photos of the home and hearing about its history filled in the gaps in their knowledge just as visiting the village had filled in mine.

But not everything is clear cut. The scope of Skinner’s contributions is a bit hazy. The Tribune mentions a school that was in the process of being built, but that was news to those I spoke to. The commune’s school is on the outskirts of town and looks like it was built within the last 50 years. While it could have been built over an old school, its location and the local scepticism led me to believe the original school never came to fruition. The town isn’t exactly bursting with new development either- the village hall still bears the mark of the “Hotel de Ville.” Nevertheless, I left the village with a better sense of understanding about the local area.

My next stop was Apremont-la-Forêt in the south. While Skinner funded Hattonchâtel, Appremont was actually a municipal project. Skinner set up a foundation to help rebuild other local villages. Using that wartime casualty connection, she convinced the city of Holyoke to help rebuild Appremont, and the city supplied a new water system for the village. Appremont is noticeably smaller than Hattonchâtel. The entire settlement is essentially three streets that form a triangle around a church- Holyoke had its work cut out for it. The Tribune claimed a town hall and hospital were also being built here, but again, that was hard to confirm. I was in town for about 15 minutes- more than enough time to see everything. I didn’t see a single person, and I definitely didn’t see anything resembling a hospital or town hall. 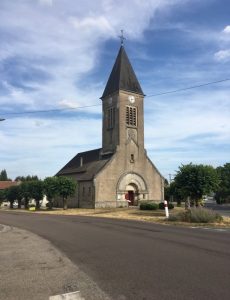 Despite all this, it seems the residents of Appremont are much more aware of their connection with Holyoke. Two of those three main streets running through the village are direct references: Rue Belle Skinner and Place d’Holyoke. And at the end of Place d’Holyoke is the water pump building, unavoidable and easy to spot. A gold-lettered inscription on the side reads: “In memory of the American soldiers who died in Apremont-la-Foret during the Great War. This water supply was donated to the town by the city of Holyoke Massachusetts, United States. It was inaugurated on September 4, 1922 by Toucas Massillon, sub-prefect of Commercy, in the presence of Major Carlyle H. Wash, representing the Ambassador of the Republic of the United States of America, Mr. Charrois being Mayor.” I wish I could have spoken to someone in the village, but I’m confident that Holyoke is much more well known. The village is way too small, and there are so many references, that it would be impossible to avoid. If the street signs are any indication, they even know Skinner’s first name! Holyoke hasn’t forgotten about Appremont either. When the Army built a road off of Route 202 heading towards Westfield in the 1930s, it was named Appremont Highway in honor of the village.

Not wanting to hold up the kind family that had offered to drive me to the train station, I hopped back in the car, and left with a wave 20 minutes later in front of Commercy’s railway depot. It had been a weird day, but so worthwhile. It was incredible to see how Holyoke had a presence 3600 miles from its city hall, and I’m thankful I had the unique opportunity to explain the city’s incredible history to the most unlikely audience. It was a life goal of mine to visit, and it was absolutely worth it. The next time you drive by Wistariahurst and gaze at its Second Empire splendour, take a minute to appreciate how its French connection goes much deeper than its trendy exterior. I know I will.

Apremont-la-ForêtBelle SkinnerFranceHattonchâtelHolyokeJoe MaspoWWI
Wedding & Event Venue
Gardens at Wistariahurst
Recent Blog Posts
Wistariahurst is owned and operated by the City of Holyoke. Additional support is provided by Historic Holyoke at Wistariahurst, our members, and generous contributions from the community.
Support the Museum
Back To Top
×