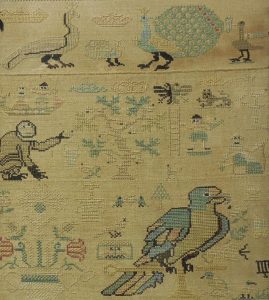 Stitch by Stitch: Needlework Samplers from the Wistariahurst Collection, brings together 15 samplers and examines them in the context of why and how they were made.  Because textiles must be kept out of direct light (which degrades fabric and fades colors), it can be difficult to see the details in the hallway where most of these samplers usually hang.  This exhibit brings them into the gallery, where visitors can see them more clearly and appreciate more fully the details in designs, verses, and stitches.

Joanne Picard, guest curator, has been studying and reproducing historic samplers for more than 30 years.  She was excited by the opportunity to examine the samplers more closely, and to highlight them for visitors. We asked her a few questions about the exhibit.

What did you want to accomplish with the exhibit?

I wanted to showcase the samplers in the museum collection while examining why they were made, and how.  Hand sewing is no longer a skill that people need in their day to day lives, so many people are not familiar with the process and techniques required.  And while people may have heard of cross-stitch (the most common stitch found in samplers), they may not have understood what it is.  The exhibit includes antique and modern examples of the materials and tools involved, such as linen fabric and silk threads that visitors can touch. There are diagrams of cross-stitch and other counted-thread stitches, and canvas on which visitors can try their hand.

What pieces do you think are especially intriguing?

Samplers tell us a lot about the people who made them, but they also raise questions that we cannot always answer.  The large “Adam and Eve” sampler, made in England in 1758, is unusually long, even for a band sampler (it’s about five feet long, almost as tall as I am).  It includes quite a menagerie (several birds, a sheep, a lion, a monkey—we think!), Adam and Eve (complete with serpent), a gentleman and lady, alphabets, and several border designs.  I wonder what was in the stitcher’s mind when she started this project.  Why did she choose to make such a large sampler?  And what inspired her to include a monkey?  (If that, indeed, is what it is.)

Then there is Hannah Pryer’s sampler, with a detailed border and verse, completed, allegedly, when she was five years old.  Samplers were typically made by girls between about 8 and 16, and five is unusually young.  Was she precocious enough to have made this very finely stitched sampler herself?  Or did someone else make all or most of it for her?  And if so, why did they put her name on it as the maker?

There is also a sampler that we think might be Spanish, but it is very difficult to read because the thread in the letters is (after years of fading) almost the same color as the ground fabric.  I am making some progress, however, and am finding other sources that seem to indicate this sampler may well be of Spanish origin.  I hope to solve this mystery definitively with a little more investigation.

Were there any surprises in the collection? 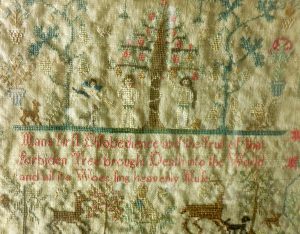 I was very pleasantly surprised at the diversity of the collection.  The 15 examples in the exhibit cover a wide range of dates (about 1690 to 1840) and styles.  There are simple “marking samplers” with alphabets and names; more elaborate ones with detailed borders, verses, and figures; a pulled thread lace sampler; a pictorial embroidery, and more.  It was also surprising to see the impressive level of detail in many of the samplers once they were brought into stronger light.  I hope that the exhibit may inspire docents to call even more attention to the samplers when they are leading tours.

Stitch by Stitch: Needlework Samplers from the Wistariahurst Collection, will be on view through August 18.

Come for a tour and see what you think: is that a monkey in the Adam and Eve sampler?  And could a five-year-old have made the Hannah Pryer sampler?

Fiber ArtshistoryHolyokeNeedleworkSamplerSamplersSewingStitch by StitchWomen
Wedding & Event Venue
Gardens at Wistariahurst
Recent Blog Posts
Wistariahurst is owned and operated by the City of Holyoke. Additional support is provided by Historic Holyoke at Wistariahurst, our members, and generous contributions from the community.
Support the Museum
Back To Top
×